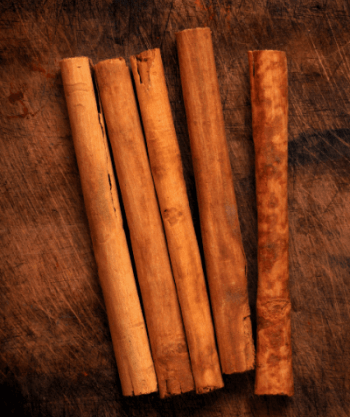 Cinnamon is one of the world’s most important spices that comes from the bark of several species of trees of the Lauraceae family.   Cinnamon has a long history of use in India and Southeast Asia, growing in tropical forests to an altitude of 500 m with soft , reddish-brown bark and yellow flowers.  They are widely cultivated throughout tropical regions, especially in the Philippines and the Caribbean.  The bark is stripped from the shoots and the inner layer is set out to dry in the sun, forming the characteristic quills.  Several species of cinnamon are used but the most popular types are the ones native to Sri Lanka and China.

Cinnamon is an ancient medicine, first mentioned in the Jewish religious text, the Torah.  It is thought to have arrived in Egypt around 2000 BCE, reaching Europe around 500 BCE.  The ancient Egyptians used it to embalm  mummies, and it was used by Roman funerals to mask the odor of dead bodies.   It was used in religious ceremonies by the ancient Hebrews and is mentioned in the Bible as an anointing oil used by Moses to make a person holy.

During the 15th century cinnamon was widely used thanks to Arab traders who brought it to Europe.  It was in high demand, enjoyed mainly by the elite as it was an expensive commodity.  “True” or Ceylon cinnamon was discovered in Sri Lanka and it was soon realized that any country which ruled this region, could monopolise world trade of cinnamon and enjoy the profits.  The Portuguese took over the cinnamon trade, only to be taken over by the Dutch and eventually the British in 1815.

The folk name for cinnamon was sweet wood, and was used as an incense which was believed to raise high spiritual vibrations, aid in healing, stimulate psychic powers and produce protective vibrations.

1. It is said that a Roman emperor accidentally killed his wife during an argument and to make up for his guilt he burned as much cinnamon he could get hold of at the funeral pyre to show how sorry he was.

3. Apparently, you can lighten your hair with cinnamon by making a cinnamon paste, adding honey and applying to the hair whilst exposing it to sunlight.

4. Cinnamon used to be at least 15 times more expensive than silver.

What Are The Health Benefits Of Cinnamon?

Cinnamon has a long history as a healing agent going as far back to Medieval times.  Physicians used cinnamon in medicines to treat coughing, hoarseness, and sore throats.   It is known for its antibacterial, antimicrobial, antioxidant, and anti-inflammatory properties.  Because of its warming and stimulating properties, cinnamon is used to boost vitality, improve circulation, and clear congestion.  It is a well-respected digestive aid, particularly for cases of overeating, bloating and sluggish digestion, and one of the best herbs around for stabilising blood sugar levels.  It is also a powerful antiseptic with antiviral and antifungal properties, and is often indicated in cases of viral infections, fungal infections and cold and flues.

It has also been useful in the treatment of  urinary tract infections, and soothe rheumatoid arthritis symptoms.  Studies have explored the possibility that cinnamon can help with managing blood sugar, improving high cholesterol, fighting dementia, and even treating multiple sclerosis. But the research so far is preliminary. According to the National Center for Complementary and Integrative Health (NCCIH).

Cinnamon is known to have a distintive role to play in promoting better blood glucose levels and in preventing insulin resistance – the impaired uptake of sugar by cells that is a warning sign of diabetes.   Studies have shown that cinnamon can reduce insulin resistance by allowing insulin to regulate metabolism and energy use.  Insulin plays an important role by transporting blood sugar from the bloodstream into cells.   Cinnamon can also help with lowering blood sugar levels by decreasing the amount of glucose entering the bloodstream after a meal.  It interacts with digestive enzymes, which slows the breakdown of carbohydrates in the digestive tract.  According to some studies Cinnamon has been shown to reduce fasting blood sugar levels, having a potent anti-diabetic effect at 1–6 grams or 0.5–2 teaspoons per day – this lowered blood sugar levels by 10-29%.

Cinnamon contains a volatile oil known as cinnamaldehyde and phenolics offering anti-tumour activity.  The biological effect of these components are also anti-oxidant and anti-inflammatory which are essential for cancer therapy.   Studies, have shown that cinnamon extracts have a link to reduce cancer cell growth by enhancing pro-apoptotic activity by inhibiting the activities NFkB and AP1 and their target genes.  Clinical studies have been carried out in vitro and in vivo mouse melanoma model.  It is believed that cinnamon extract a potential anti-tumour agent for treatment of some cancers.

Ongoing research has linked the benefits of consuming cinnamon on brain health showing positive results.  An animal study published in the July 2015 issue of Nutritional Neuroscience found that an extract made from cinnamon helped protect lab rats from cognitive impairment and brain damage associated with oxidative stress. Brain benefits associated with cinnamon consumption in humans include reduced inflammation and improved memory.  A study carried out on 20 children from 2 to 7 years old with ADHD was carried out in an outpatient clinic.  They were split into 2 groups of 10 with one being the controlled group.    The controlled group received rehabilitation treatment whilst the experimental group received the same with the addition of cinnamon aromatherapy.  The children were exposed to 1% cinnamon essential oil in 100ml water twice a week for 30 minutes over a 6-month period.  According to data analyses both groups did well but the experimental group showed significant improvement in child activity.

According to Alzheimer’s.net there are two compounds found in cinnamon that have an inhibitory effect on a protein in the brain called tau. These compounds, cinnamaldehyde and epicatechin, can possibly prevent the aggregation of the tau protein, which is a hallmark of Alzheimer’s. Tau proteins can form clumps or tangles in the brain which researchers think can be the cause of the disease. The compounds found in cinnamon have been shown to prevent these clumps from occurring, and thus, possibly preventing Alzheimer’s.

For over 3,000 years, Ayurvedic Medicine has used cinnamon for various ailments, including heart disease.  Some studies indicate that cinnamon might reduce the risk of heart disease and lower LDL cholesterol and triglycerides.   Cinnamon may also contain anti-clotting properties thanks to its anti-inflammatory properties which inhibit the release of inflammatory fatty acid into the bloodstream.  The release of fatty acids in the body promotes plaque accumulation in the arteries.  Cinnamon is known to be a blood thinner and this is particular useful in conditions of heart disease where thickening of the blood is presented a long with high blood pressure.

How Often Can I Take Cinnamon?

Cinnamon is generally safe if consumed no more than 8 mg per day for body weight that is 178 pounds.  You can enjoy 1-2 cups of cinnamon tea (link to website) daily which has been blended with Chinese black tea.

Consuming too much cinnamon can have create some side-effects such as irritation or allergies to the skin.  Cinnamon contains a compound known as coumarin and this should be avoided in large quantities especially for those with liver conditions.

Cinnamon has the ability to effect sugar levels and those taking diabetes medication might need to have their medication adjusted.

Is it safe for pregnant and nursing women to take it?

There isn’t enough data or evidence for its safety, so cinnamon supplements should be avoided

Is it good to drink cinnamon everyday?

We have incorporated cinnamon into some of our teas to enhance the tea flavour profile as well as carefully combined it with well-known medicinal healing herbs for its health benefits.

Spiced Chai – is a delicious medium bodied black tea with an array of Indian spices to create an aromatic chai blend.  The cup offers delicate sweetness with lingering spicy notes of cinnamon.

Far East Tea – Has been beautifully blended with Chinese and Ceylon black teas, and the intoxicating spices of vanilla and cinnamon muddled with orange makes a perfect Christmas tea.

Love – This is a herbal infusion of lovely botanical herbs known traditionally to support the reproductive system and even thought to enhance one’s romantic mood.

Metabolise – Has been designed with traditional herbs known to promote a speedy metabolism, and help with weight loss when combined with a healthy diet and exercise.