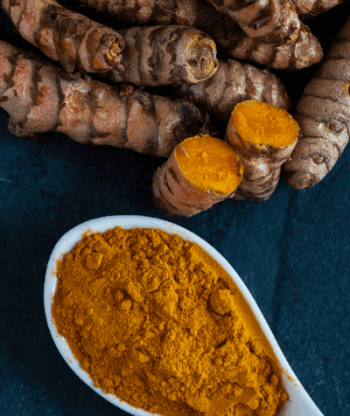 Turmeric is a close cousin to ginger and is native to India and South Asia. It is known for its bright yellow colour and spicy taste in Indian food. Although it is a highly regarded medicine in its native regions, its powerful healing properties have been mainly ignored by the rest of the world until recently. Turmeric is increasingly recognized as a medicinal food with almost unparalleled health benefits. Its decisive anti-inflammatory action makes turmeric an essential remedy in many chronic health problems, including allergies, arthritis, diabetes and psoriasis.

Turmeric is cultivated throughout the tropics, but India has been the largest producer of turmeric since ancient times. Turmeric plants reach about 1 meter in height, with long leaves that emerge from the branching rhizomes below the soil surface. The rhizome looks similar to ginger. They require well-drained soil with a humid climate to thrive.

Turmeric has been used medicinally for over 4500 years. Analyses of pots discovered near New Delhi uncovered residue from turmeric, ginger, and garlic dating back to 2500 BCE. It was around 500 BCE that turmeric emerged as an essential part of Ayurvedic medicine. Ayurveda is an ancient Indian system of natural healing that is still practised today.

The Hindu religion sees turmeric as auspicious and sacred. There is a wedding day tradition in which a string, dyed yellow with turmeric paste, is tied around the bride’s neck by her groom. This necklace, known as a mangala sutra, indicates that the woman is married and can run a household. The tradition still continues in Hindu communities and has been compared to the Western exchange of wedding rings. In southern India, a turmeric rhizome is worn as an amulet for protection against evil spirits.
Turmeric has been used in Hawaiian magic for purification; saltwater and turmeric are mixed together and then sprinkled in areas to be purified.

1. The vibrant yellow natural coloring of turmeric has also been used to dye clothing and thread for centuries.

3. Curcuma stems from the Arabic word al-kurkum, which was the original word for saffron.

4. People in the Middle Ages called turmeric “Indian saffron” because it was often used as a less expensive alternative to saffron.

5. Turmeric paste is a home remedy for sunburn, and it is also an ingredient in many commercial sunscreens.

6. Turmeric has 53 different names in Sanskrit, each one referring to specific health properties.

What Are The Health Benefits Of Turmeric?

Over the last few decades, many scientific and clinical studies have focused on the potential of curcumin for treating various diseases. Curcumin has been researched mainly for its anti-inflammatory and antioxidant properties. Oxidative damage and inflammation are now known to be the root cause of cancer and neurodegenerative diseases.

Turmeric is a natural antioxidant that has anti-inflammatory benefits. Inflammation is a natural process in the body and is essential to keep the body safe from bacteria, viruses and injuries. Long-term or chronic inflammation can be harmful to the body. Symptoms can present themselves in various conditions such as fatigue, persistent infections, digestive issues, depression or anxiety, body pain, and weight gain or weight loss. Prolonged inflammation can also manifest into heart disease, cancer, and autoimmune diseases

Curcumin is the active compound that blocks certain enzymes and cytokines that lead to inflammation, making this an essential chemical compound for treating rheumatoid arthritis, arthritis, and any conditions associated with inflammatory diseases. A small study was carried out in 2012 on 45 people with rheumatoid arthritis. The group was divided into 3, and 1 group were given 500 milligrams of curcumin only. The other 2 groups received diclofenac sodium. The group on curcumin showed better improvement in comparison to the other 2 groups. The study also showed that curcumin was a safe treatment with no adverse reactions.

A study carried out in 2009 showed that curcumin could kill many types of cancer cells without affecting healthy cells. Curcumin somehow changed the growth of cancer cells by regulating multiple signalling pathways such as cell proliferation, cell survival, tumour suppressor, death receptor, and many other pathways.

Studies are still ongoing, but the findings so far seem very promising for treating certain types of cancers.

Some studies have shown that curcumin may help improve the health of the endothelium, a thin membrane that lines inside the heart and blood vessels. This membrane is responsible for regulating blood pressure by releasing substances that control vascular relaxation and contraction.

It also releases enzymes that control blood clotting. As the body ages, the functionality of the endothelium cells reduces, which could increase the risk of heart disease. It has been found that curcumin may help by reducing the ageing effect on endothelium cells. A controlled study was carried out on postmenopausal women, showing consumption of curcumin, along with aerobic exercise training, improved vascular endothelial function.

Research has also suggested that turmeric may help people who are unable to exercise due to heart failure. People with heart failure have reduced functionality on the left ventricle of the heart chamber, making exercise difficult. A study on mice showed that curcumin treatment improved muscle function and the ability to exercise.

Ongoing studies show that turmeric and curcumin may help patients at risk of cardiovascular disease by improving lipid levels in the blood. Curcumin may work well in conjunction with conventional drugs, but further clinical studies are required to determine the dosage and frequency.

Turmeric has been used for the treatment of diabetes for centuries in Traditional Chinese Medicine and Ayurveda. Lately, turmeric has been gaining a lot of coverage by scientists for its potential therapeutic effect on diabetes because it has shown to be effective in reducing glycemia and hyperlipidemia in rodent models.

Turmeric is considered safe when consuming up to 3 grams daily for 3 months or in small amounts as a spice in food. Some effects may be experienced if consumed as a supplement in a high dosage format. A large portion of turmeric should be cautiously consumed if you are pregnant, breastfeeding, have gallbladder problems such as gallstones and have bleeding disorders as turmeric slows down blood clotting.

We have included turmeric in our Therapy Tea range as this comes in a safe dosage format and is medically reviewed by a third party.

Refresh and Rebuild offers warm, zesty and spice aromas with the delicate sweetness of sweet chamomile and spice undertones. The ingredients have been carefully blended together to help enhance the tea’s health benefits. Turmeric has been combined with black pepper to help release curcumin’s therapeutic values, and the addition of rosemary makes this a perfect cup to address inflammation conditions.

Can I have turmeric every day?

Yes, as a spice added to food

Ginger and turmeric safe to take together?

Yes, but should be consumed in moderation as they can be heaty to the body.

How much black pepper is needed when consuming turmeric?

Disclaimer: This website contains general information about the traditional use of herbal teas. The information is not advice and should not be treated as such. If you have any specific questions about any medical matter, you should consult your doctor or other professional healthcare providers.