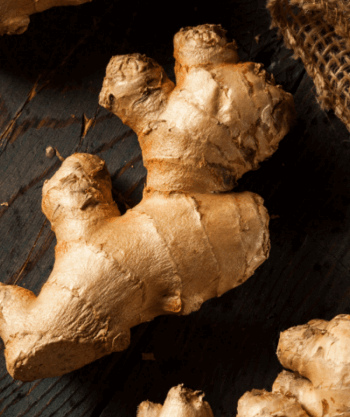 Native to Asia, ginger is grown throughout the tropics and is known for its medicinal properties. Ginger flourishes in fertile soil and needs plenty of rain. The rhizomes, the roots, are extracted when the plant is ten months old. They are then washed, soaked and sometimes boiled and peeled.

Ginger, used as a medicine in Asia and Europe for hundreds of years. In Medieval Europe, ginger was believed to have originated from the Garden of Eden. Ginger’s warming and anti-inflammatory properties are known to relieve problems as varied as headaches and migraines, joint pain, indigestion, travel sickness, and morning sickness.

Whole ginger roots were planted and grown to attract money, or the powdered root was sprinkled into pockets or onto money for this purpose. Ginger consumed before performing spells as the belief was that it would have a successful effect.

1. Ginger is a rhizome (stems that grow underground) and not classified as a root

2. You can both purchase and grow ginger rhizomes at home

3. In Japan, sliced ginger are eaten between courses to clear the palate

4. Old traditional practices such as TCM and Ayurveda have relied on ginger for over 3000 years for its anti-inflammatory properties and have used it alongside other herbs so that those herbs work more effectively in the body

What Are The Health Benefits Of Ginger?

Ginger used for thousands of years for the treatment of hundreds of ailments from colds to cancer. It contains a proteolytic enzyme known to reduce inflammation and help repair damaged joints and cartilage tissue. It is also known to improve circulation, especially in the pelvis and is often a reproductive tonic for men and women. Numerous studies indicate that ginger lowers blood level triglycerides linked to diabetes and heart disease. Clinical studies also show that ginger can be used instead of anti-nausea drugs for chemotherapy without their side effects.

The chemical composition of ginger is known to work effectively in the gastrointestinal tract, and its enzymes help break down the gases and expel them from the body. Clinical trials have also shown ginger can stimulate antral contraction, thus aiding and preventing constipation.

Ginger has been used traditionally for its effect on nausea and vomiting for centuries, and several studies have confirmed its effectiveness. However, more research is needed to understand the mechanisms against nausea fully. According to (Schmid et al. 1994), ginger is commonly recommended to prevent seasickness and is probably more effective than the anti-nausea drug Dramamine. A successful study showed that 1g of ginger given to naval cadets with seasickness was adequate, but other studies have shown conflicting results. Clinical studies have proven ginger to be effective during early pregnancy, where nausea is marked. Women who received 250-mg capsules experienced less vomiting.

With regards to chemotherapy , according to Sharma and Gupta 1998, gingerol, which is a component of ginger, was reported to reduce cisplatin (a platinum-based chemotherapy drug) which causes gastric irritation and triggers vomiting. Ginger also has positive effects in preventing chemotherapy-induced nausea and vomiting in children, according to Dupuis and Nathan 2003.

The components of ginger may inhibit the rapid spread of human cancer cells by a process known as apoptosis. The study of ginger with all its compounds have gone through various studies focused on suppressing the growth of certain cancer types such as skin, liver, bladder, breast cancers including lymphoma and hepatoma. The potent antioxidant properties of ginger may contribute to the decrease in the proliferation of cancer cells.

Ginger is popular amongst herbalists and has been used for centuries to manage pain, swelling and inflammation.

A small study suggested that consumption of raw and heat-treated ginger resulted in a reduction in exercise-induced muscle pain. It also showed the effectiveness of ginger as a pain reliever in osteoarthritis.

Ginger, known to help with painful dysmenorrhea, according to a review published in May 2016. Six trials, carried out with three studies, comparing ginger with placebo and other comparing ginger to a nonsteroidal anti-inflammatory drug. Ginger came out more effective for reducing pain than the placebo. There was no difference observed between ginger and the anti-inflammatory drug. The conclusion was ginger could be a valuable treatment for painful menstrual in dysmenorrhea.

Consuming more than 5g per day could create heartburn or digestive discomfort for some people.

People who take blood-thinning medication should be cautious when drinking ginger tea. Ginger is known to be safe during pregnancy but may cause bleeding close to the delivery date. One should seek medical advice before taking ginger during pregnancy.

Ginger might slow down blood clotting and increase bleeding after surgery, so best to avoid it.

Ginger tea can help with weight loss along with a healthy diet and exercise.

Ginger is loved as it offers many health properties. We have combined ginger with a variety of herbs to create a larger spectrum of wellness teas.

Digest and Energise is the latest new addition to the wellness range, and falls under the dosage format teas created to help with chronic conditions and side effects of drug therapy. It focuses on gut health and releasing energy within the body.

The infusion offers warming ginger notes with a light and delicate lemon and mint flavour.

Immunity combines ginger with rooibos leaves and other ingredients packed with Vitamin C and boosts the immune system.

It offers a woody infusion with a splash of tangy notes and a warming ginger finish.

Soothe presents a combination of chamomile, lavender and ginger and results in a delicious soothing cup of tea for all occasions.

Metabolise combines ginger with traditionally used liver support herbs to help cleanse and speed up the metabolism. They are especially effective when combined with exercise and a healthy diet.
Lemon & Ginger (link to the website) is a delicious zesty cup of digestive ingredients combined with ginger to offer citrus lemon and warming ginger notes.