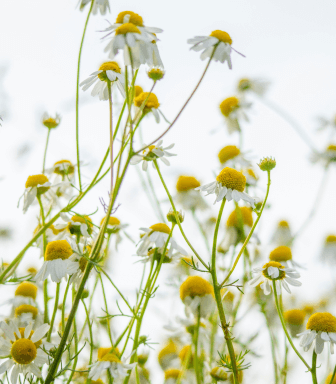 Chamomile is a well-known and highly respected plant and a healing wonder.  It is native to most of the European and Asian continents as well as North and Southwest America.  They can be grown easily from seeds and best cultivated by being sown directly in the garden in early spring.  It prefers dry, light, well-drained soil but isn’t overly fussy.  Chamomile prefers full sun but enjoys cooler climates as well.   It will get leggy and/or bolt in really hot weather.  Chamomile can also grow like weeds all over the world, they grow as a small shrub reaching 8-12 inches but can grow up to 3 feet high.  They can reseed themselves and naturalise wherever their seeds find a sunny location to set roots.  Chamomile has a distinct fragrance of apples, and it comes from the Greek word meaning “ground apple”.

There are two different varieties of Chamomile which are commercially used for health-related treatments; German and Roman Chamomile.  We use the German variety as this is more commonly used and considered to be more potent than the Roman chamomile.    German chamomile is also known as Matricaria Recutita.

Chamomile is a flowering plant and is native to the Old World belonging to the daisy (Asteraceae) family.  According to Eber’s Papyrus (medical document from Ancient Egypt), the earliest recorded use goes back to 1550 BC, but it has also been documented that chamomile was used as a herbal remedy at the time of Hippocrates in 500 BC.  In the ancient world, Chamomile was extensively used to treat fever, headaches, kidney, liver and bladder problems as well as digestive complaints, menstrual cramps, female reproductive disorders, insomnia, anxiety allergies, inflammation and so much more.  Today, nothing much has changed and chamomile remains a top-selling herb in the tea marketplace for similar ailments.

Chamomile has an impressive history of being a sacred and powerful healing herb, it has been associated with the worship of gods and sun deities.   In ancient Egypt, chamomile was sacred to the sun god Ra and widely used to treat ailments and used for beauty treatments, especially amongst high- ranking Egyptians.  Chamomile was also used in the mummification process and embalming the dead. 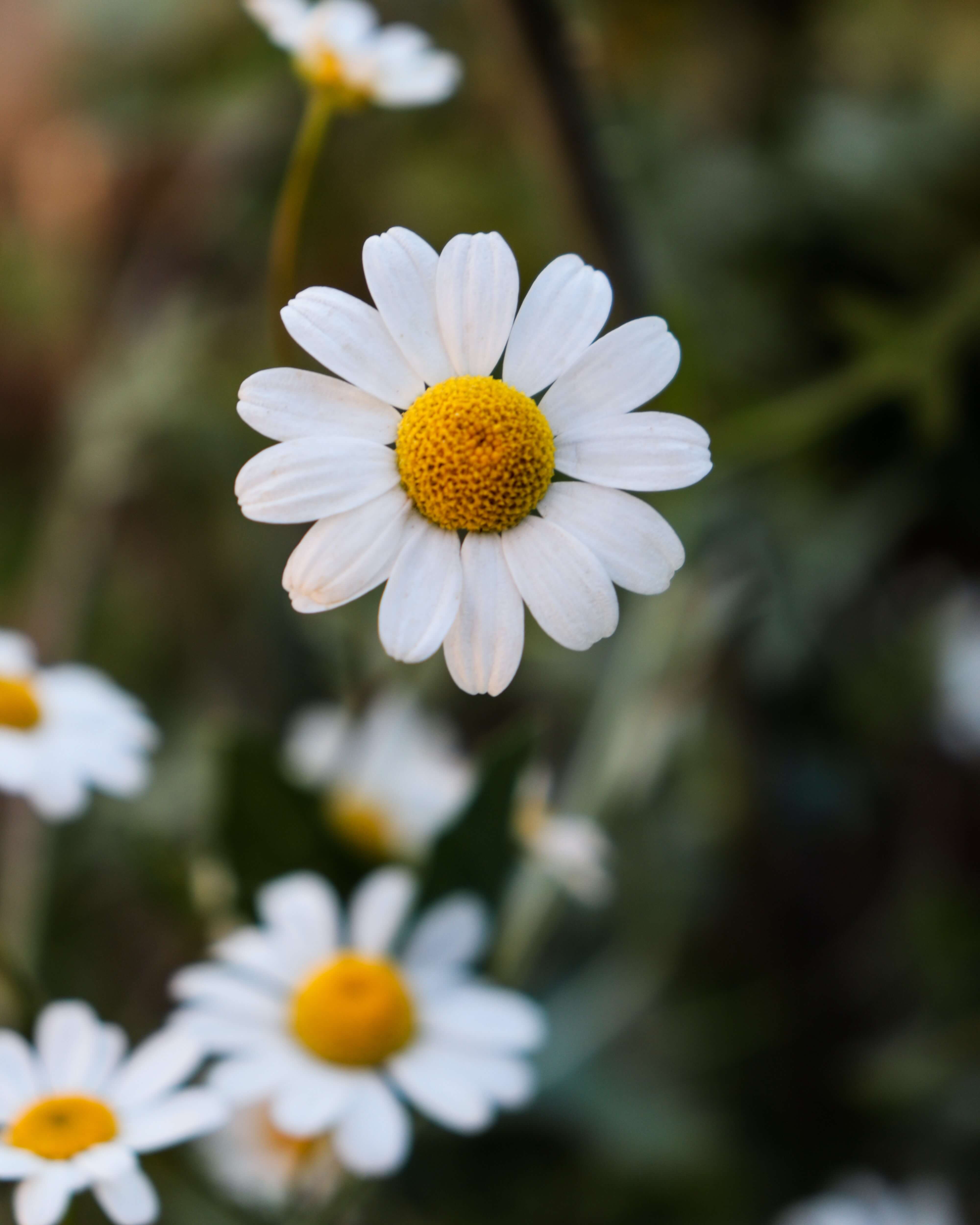 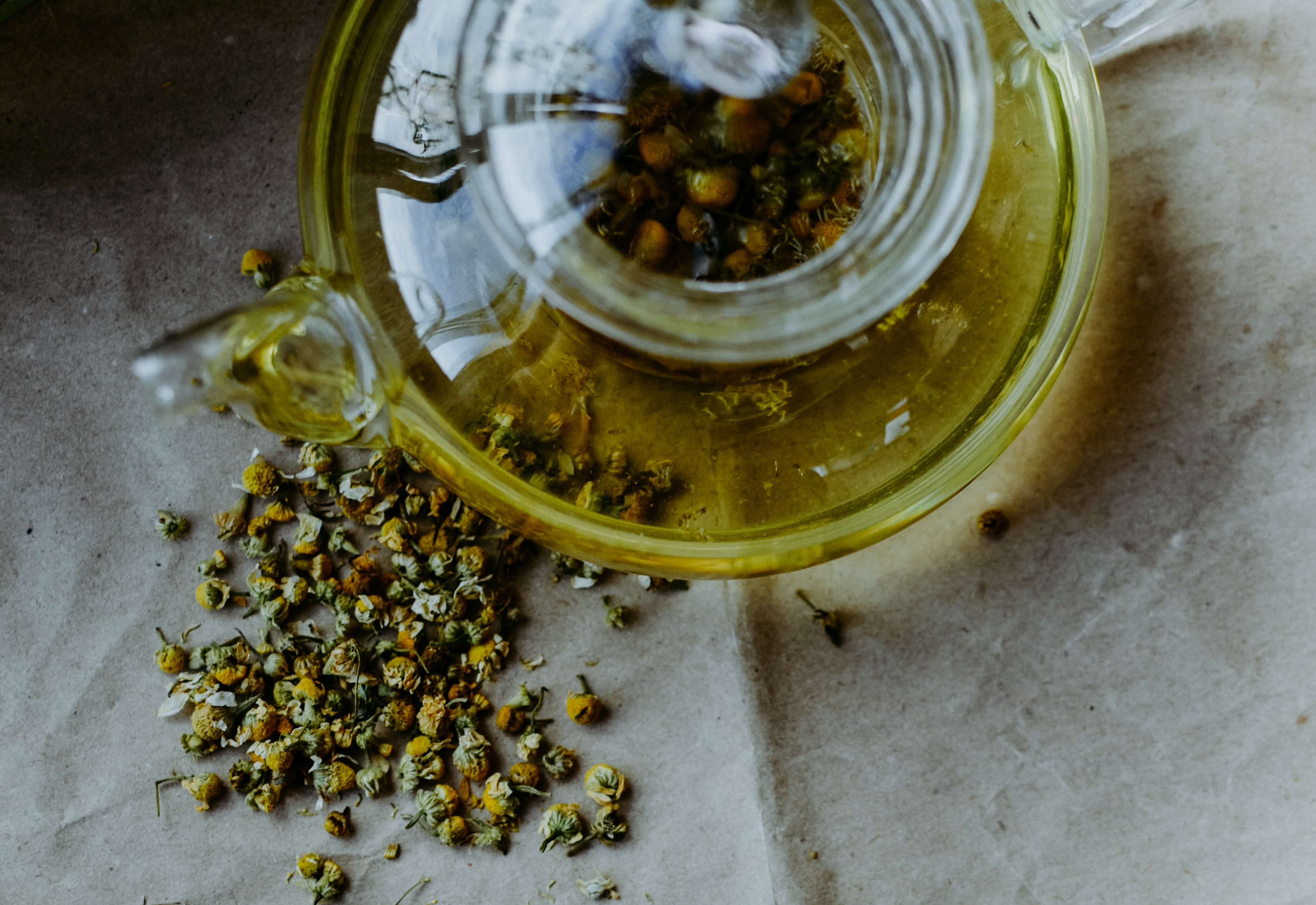 In the Old World, chamomile was known as a lucky flower; young women would make hair garlands to attract an admirer or people would carry some in their pockets for good fortune.

In the Encyclopedia of Magical Herbs, Scott Cunningham sums this up pretty well!  “Chamomile is used to attract money and a hand wash of the infusion is sometimes used by gamblers to ensure winnings. It is used in sleep and meditation incenses, and the infusion is also added to the bath to attract love.”

1. Did you know that Chamomile is the national flower of Russia?

3. Did you know a chamomile tea soak can dye fabric to bright yellow? 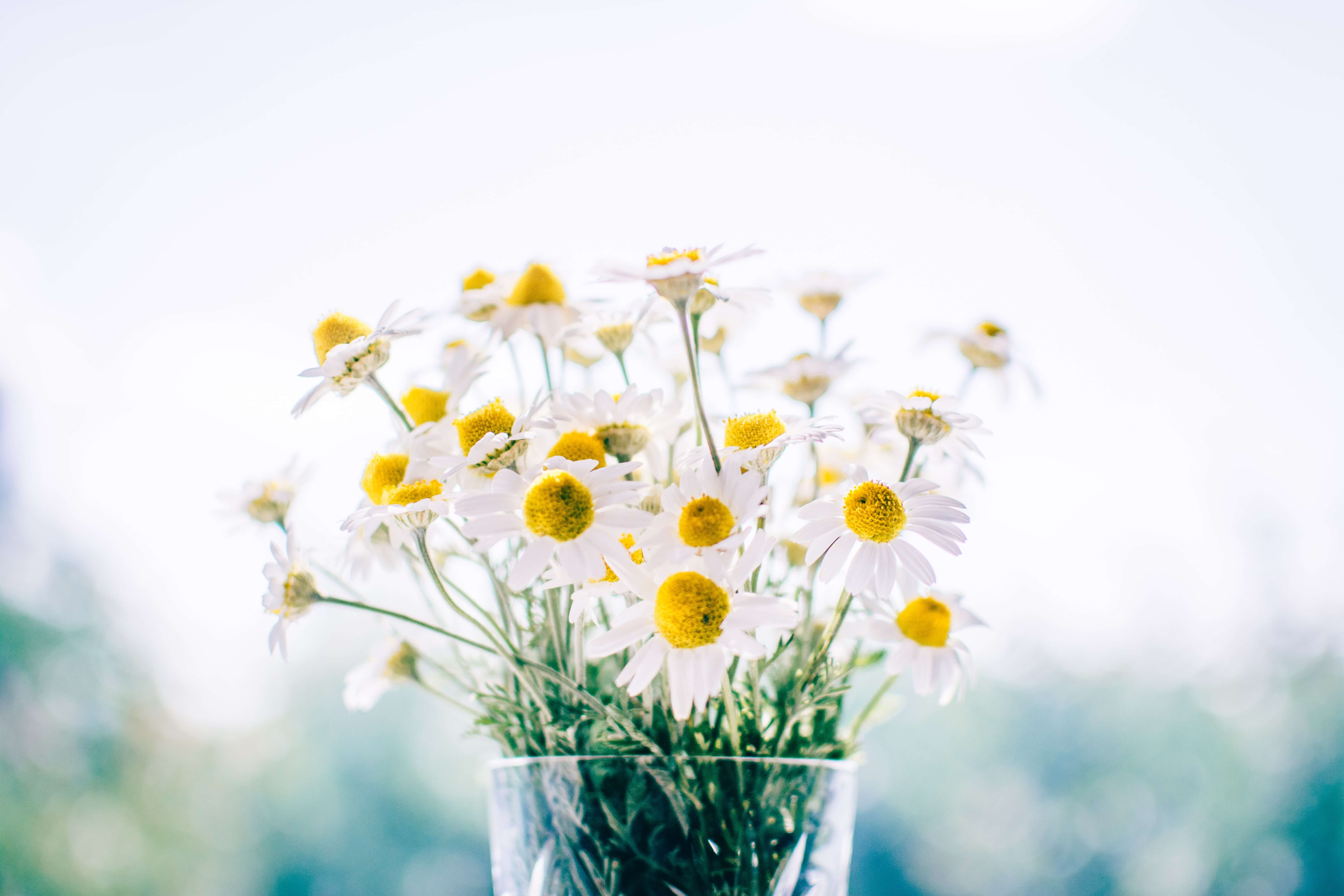 What Are The Health Benefits Of Chamomile?

The medicinal properties of chamomile have been highly esteemed since medieval times and backed by physicians for centuries.  Its common usage in modern-day life has received extensive scientific research and will probably continue to be evaluated for its health-promoting bioactive phytochemical compounds for some time to come.

Chamomile demonstrates that gentle does not mean less effective; though exceedingly gentle, it is also potent and effective.  Chamomile flowers have a rich amount of azulene, a volatile oil with a whole range of active principles that serve as anti-inflammatory and anti-fever agents, making it useful for treating arthritis and other inflammatory conditions.  Some clinical studies confirm what herbalists have long known; the plant offers excellent support for the nervous and digestive systems.  The calming tea is good for easing stress and nervousness, promoting sleep and aiding digestion.  Chamomile is a popular remedy for calming colic and childhood digestive issues.

Chamomile makes an excellent sleep aid due to its calmative effects on the body.  Apigenin is the chemical found in chamomile that binds to certain receptors that are similar to benzodiazepine (a prescriptive drug to help reduce anxiety) in the brain which induces sedation.  More clinical trials need to be carried out in humans but one study showed that 80 postpartum women were employed to carry out an experiment where half of the group were given chamomile tea for 2 weeks whilst half were given normal postpartum treatment.  The results showed that the experimented group demonstrated few physical symptoms related to lack of sleep in comparison to the controlled group. The conclusion was that postpartum women could be given chamomile as a supplement to help with depression and better sleep quality.

Can you drink chamomile tea every night?

Does chamomile tea make you calm?

Thanks to an antioxidant called apigenin, which binds to certain receptors in your brain, decreases anxiety and initiates a state of calmness 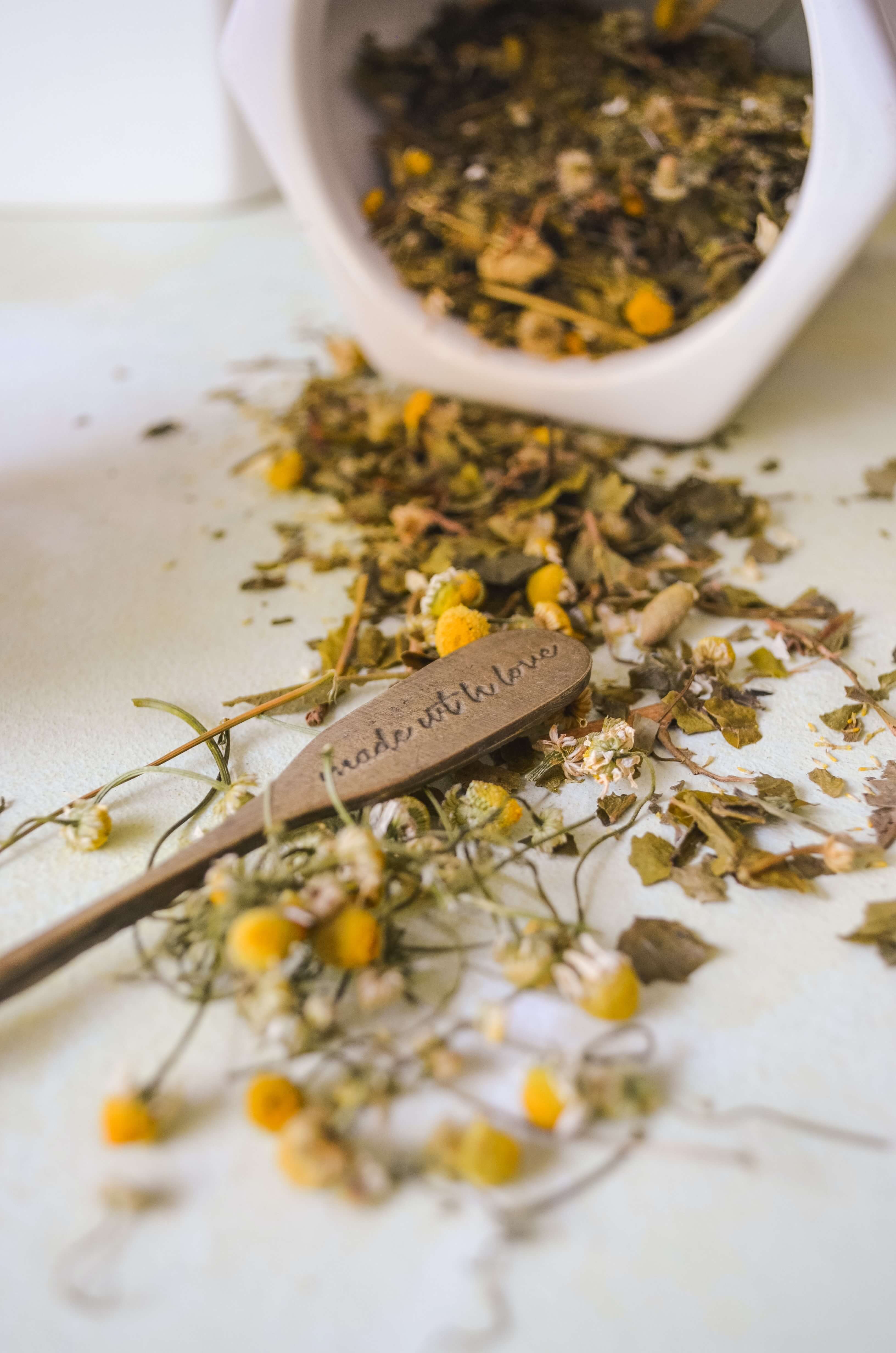 Chamomile has been reported to show positive benefits in the treatment of generalized anxiety disorder (GAD).  Controlled clinical trials carried out in Amsterdam in 2009, showed that chamomile extracts may have anxiolytic activity (reduced anxiety) in patients with mild to moderate GAD

How many cups of chamomile tea can I drink for anxiety? 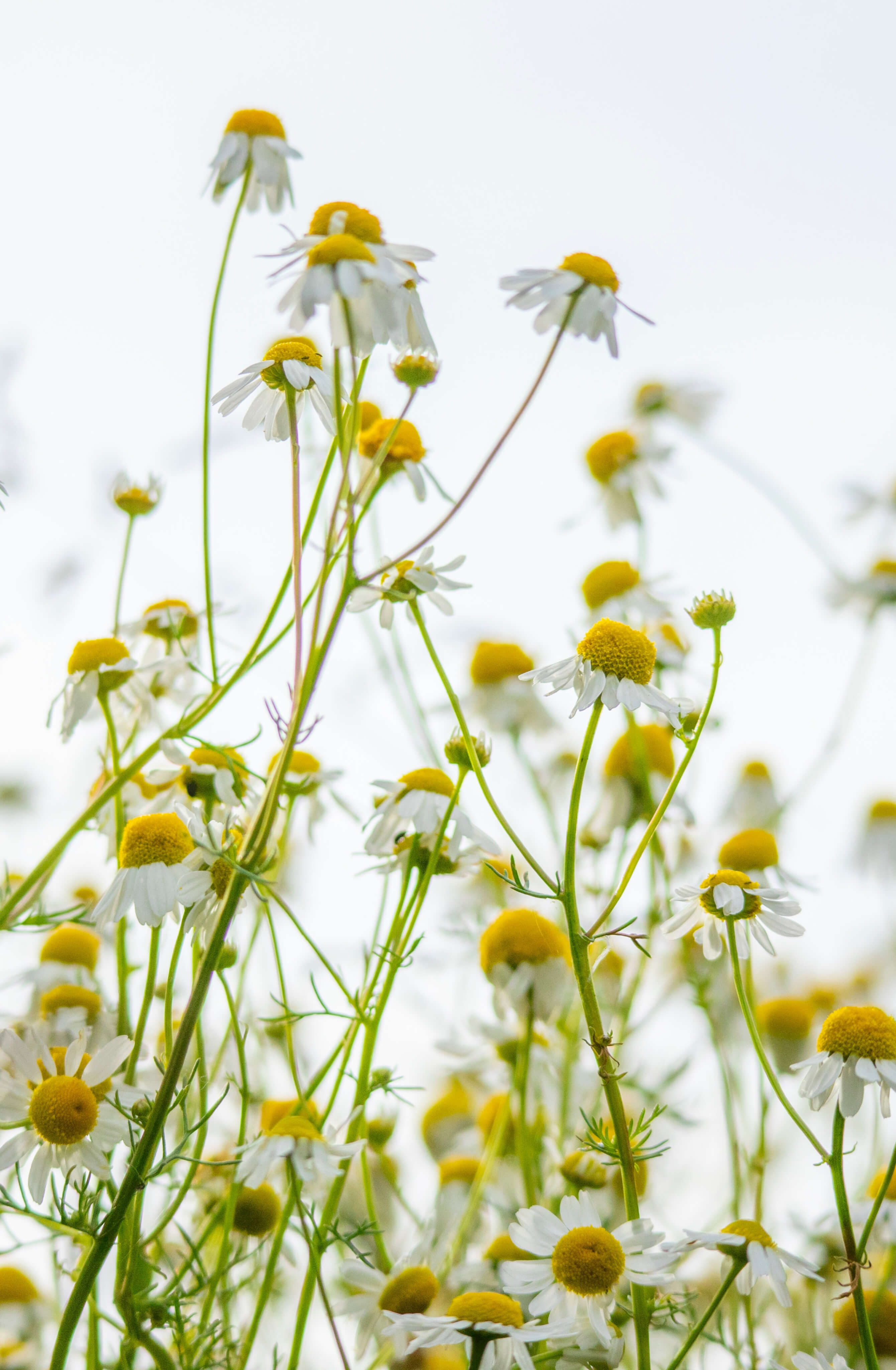 In ancient Egyptian times, chamomile was used to treat any disorders related to the digestive system, especially where there was inflammation to the bowls.  Some studies suggest that chamomile can inhibit bacteria that contribute to stomach ulcers.  Further research indicates that there is a reduction of acid output and an increase of mucin secretion, helping to neutralize acidity in the gastrointestinal system.

Research carried out on rats in 2014 showed that chamomile extract had a potent anti-diarrheal and anti-oxidant properties which confirmed its legitimacy as a natural treatment for symptoms related to diarrhea. Chamomile tea is commonly consumed for its calmative properties which offer relief to abdominal pain, intestinal gas, constipation and indigestion but more research needs to be carried out.

Ancient civilizations used chamomile for healing many conditions including inflammation, irritation and wound healing on the skin.  Chamomile is used in therapeutic skin products to help with itching, ulcers, eczema and even nappy rash.  Studies show that chemical compounds found in chamomile contain anti-bacterial, anti-inflammatory and anti-microbial properties that may kill viruses and bacteria including staphylococcus aureus.

Chamomile has a cooling effect on the body and has been found to be useful in conditions of eczema, mild skin irritations such as rashes and sunburn.  Further research is needed to fully understand the healing effects of chamomile on the skin.

Is chamomile tea good for your skin?

Chamomile offers cooling, anti-inflammatory and anti-bacterial properties that has been reported to have positive results for skin ailments.

Chamomile contains a chemical called apigenin which is present in common food and vegetables.  It is a bioactive flavonoid that contains anti-inflammatory, anti-oxidant and anti-cancer properties.   Studies involving chamomile extracts and apigenin on skin, prostate, breast and ovarian cancer showed to have a promising reduction in various human cancer cell lines.  Furthermore, a controlled study carried out in Greece showed that drinking 2-6 cups of chamomile tea per week protected against thyroid disease and other benign thyroid diseases.

How often can I drink chamomile tea?

Adverse effects are minimal; only someone who has an allergic reaction to members of the aster family may develop problems.  People who have known sensitivities to pollen should be cautious about drinking the tea. 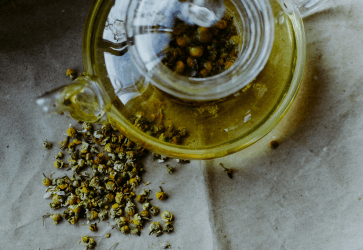 Chamomile tea combines well with other complementary herbs to enhance the healing effects.  The following teas contain chamomile flowers and have been designed specifically to target different areas of the body:

Summer Garden is an infusion of chamomile, lavender and ginger which is ideal for relaxing moments.  People who have consumed this find relief from headaches and stomach cramping.

Balance Tea has been developed using traditional herbal principles to help with hormonal imbalances, especially during the menses.