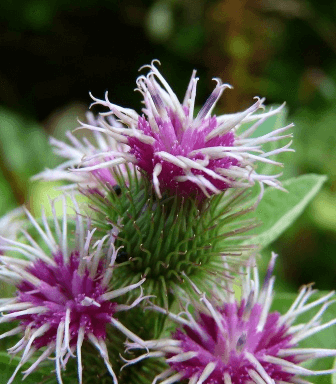 Burdock is a tenacious wild plant that is native to Europe and Asia and grows in temperate regions throughout the world, including the US. Burdock is a large plant with huge broad leaves and a stem that grows from three to six feet tall. The flowers are pink-to-purple globes and are followed in the autumn by a brown seed head with numerous prickly hooks. Burdock’s deep, slender root is ten to thirty inches long and has dark outer skin.

Also known as Arctium lappa, Burdock is recommended as a healthy and nutritive food in Chinese societies. It has been used therapeutically in Europe, North America and Asia for hundreds of years.  The roots, seeds and leaves of burdock all have their different therapeutic uses in Traditional Chinese Medicine (TCM). Antioxidants and anti-diabetic compounds have been found in the root. In the seeds, some active compounds possess anti-inflammatory effects and potent inhibitory effects on the growth of tumors such as pancreatic carcinoma. In the leaf extract, the active compounds isolated can inhibit the growth of micro-organisms in the oral cavity. The medicinal uses of burdock in treating chronic diseases such as cancers, diabetes and AIDS have been reported.

Burdock is traditionally used to treat diseases such as sore throat, infections, rashes, boils and various skin problems. According to TCM, these pathological events are mainly due to the accumulation of toxins in the body.

What Are The Health Benefits Of Burdock?

Burdock contains many active ingredients (isolated from different parts of the plant) that have been shown to possess many therapeutic effects for the treatment of various diseases. Documented reports  have demonstrated a wide range of possible clinical uses of burdock, because of its anti-inflammatory, anti-tumor/cancer, anti-diabetic, anti-microbial and anti-viral effects.

The most nutritious part of the plant is believed to be the root which is home to a variety of powerful antioxidants and other key constituents offering relief to several health complaints. Burdock has been well documented for its affinity to the skin because it contains chemicals to help the body to detoxify. 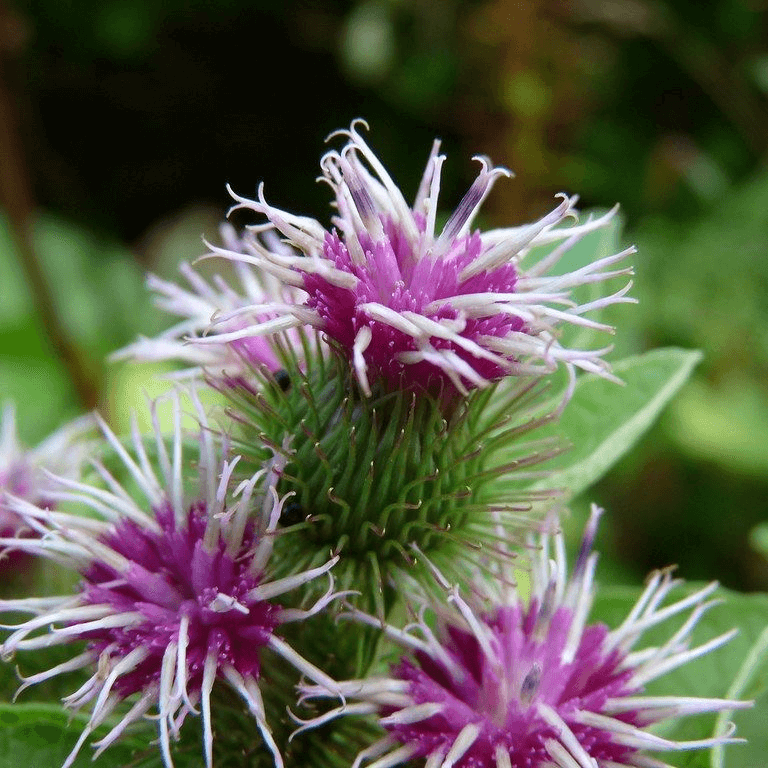 Burdock was a traditional remedy for gout, fevers and kidney stones. Today, it is a well-known detoxifying herb in both Western and Chinese herbal medicine.  It is used to absorb toxins, metabolic wastes through the liver, lymph nodes, large intestine, lungs, kidneys and skin.  The toxins are then carried to the bowels for elimination.  Pharmacological studies and clinical trials indicate that Burdock contains chemical substances that prevent liver damage but also carry anti-inflammatory, free radical scavenging and antiproliferative activities.

Burdock contains diuretic and antibiotic properties and its mild, bitter character makes it helpful to treat skin disorders, especially where toxicity is a key factor.  Skin conditions such as acne, abscesses, local skin infections, eczema and psoriasis have seen benefits when using burdock. Evidence suggests when consuming burdock, toxins are removed from the blood, and circulation to the surface of the skin is improved.  The ability to have cooling effect on the internal body also enhances healing. When applied topically, its anti-inflammatory and anti-bacterial properties can also help resolve skin issues. Burdock extracts have also been proven to show clinical improvement in signs of aging skin, but further research is still needed.

Burdock root contains active ingredients which help carry out toxins from the blood. It is believed to stimulate the lymphatic drainage system and help with the process of detoxification.

Burdock root contains phytochemicals* such as flavonoids, lignans and polyacetylenes which are known to help detoxification through increased circulation.

Phytochemicals are plant compounds found in plants, fruit, vegetables, whole grains, nuts, seeds and legumes that contribute to their colour, taste and smell.   Their consumption is essential for health, like vitamins and minerals. Preclinical, clinical, and epidemiological research suggests that phytochemicals may be effective in treating various diseases owing to their antioxidant and anti-inflammatory activities.

During the development of tumors, a large amount of nutrients (oxygen and nutrients) are required to sustain the rapid proliferation of tumor cells. When deprived of nutrients such as glucose and carbohydrates, high tolerance tumor cells can still survive this hostile environment. Studies show Arctigenin, which is a lignan found in certain plants of the Asteraceae family, is an active compound found in burdock seeds and may eradicate nutrient-deprived cancer cells.

Burdock is a well-known remedy for conditions of gout, hepatitis and other inflammatory disorders.  Pharmacological studies indicate that burdock roots contain compounds that help protect the liver whilst eradicating excessive free radicals from the body.  A study on animals showed that burdock helped reverse liver damage caused by alcohol.

Burdock has been used to treat diabetes by TCM practitioners, but several studies have suggested that the root may contain compounds with hypoglycemic effects. Sitosterol-beta-Dglucopyrano side is considered to be the most beneficial substance among the other compounds found in the root of burdock.  This is because it carries inhibitory effects on glucosidase activities which are responsible for glycoprotein production.

Furthermore, inulin a natural carbohydrate present in the root of burdock can act on cell surface receptors to keep the blood glucose level constant, therefore improving the tolerance to high glucose level. Interestingly, inulin is also prebiotic and known to help with digestive health.

How Often Can I Take Burdock Root?

There isn’t enough scientific information to determine an appropriate range of dosing.

But if you are taking it combined with other herbs in a herbal tea blend, like our Digest and Energise tea infusion, then we recommend up to 5 cups a day. 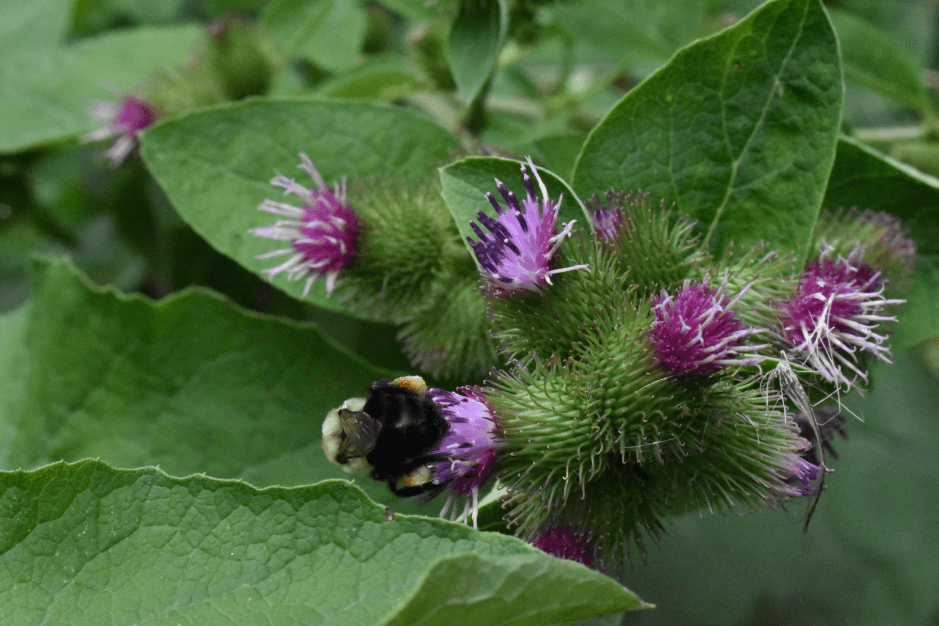 However, it is also essential to be aware of the side effects of burdock including contact dermatitis and other allergic/inflammatory responses that might be evoked by burdock. It is expected that further investigations will lead to a better understanding of some other roles that burdock play in preventing and treating human diseases, as well as the potential adverse effects and toxicity of the herb.

Who Should Not Take Burdock Root?

The ingredients in Digest and Energise tea have been carefully selected to combine well with burdock root and enhance the healing effects of this herbal tea infusion.  The inspiration behind this blend is to support people living with cancer and other diseases where there is poor digestion, low vitality and chemical toxicity.  The herbal infusion combines mint, ginger, nettle, marshmallow, lemon peel, orange peel, rose hips and burdock root to create a delicious and therapeutic tea blend.

Disclaimer: This website contains general information about traditional use of herbal teas.  The information is not advice, and should not be treated as such.  If you have any specific questions about any medical matter you should consult your doctor or other professional healthcare providers 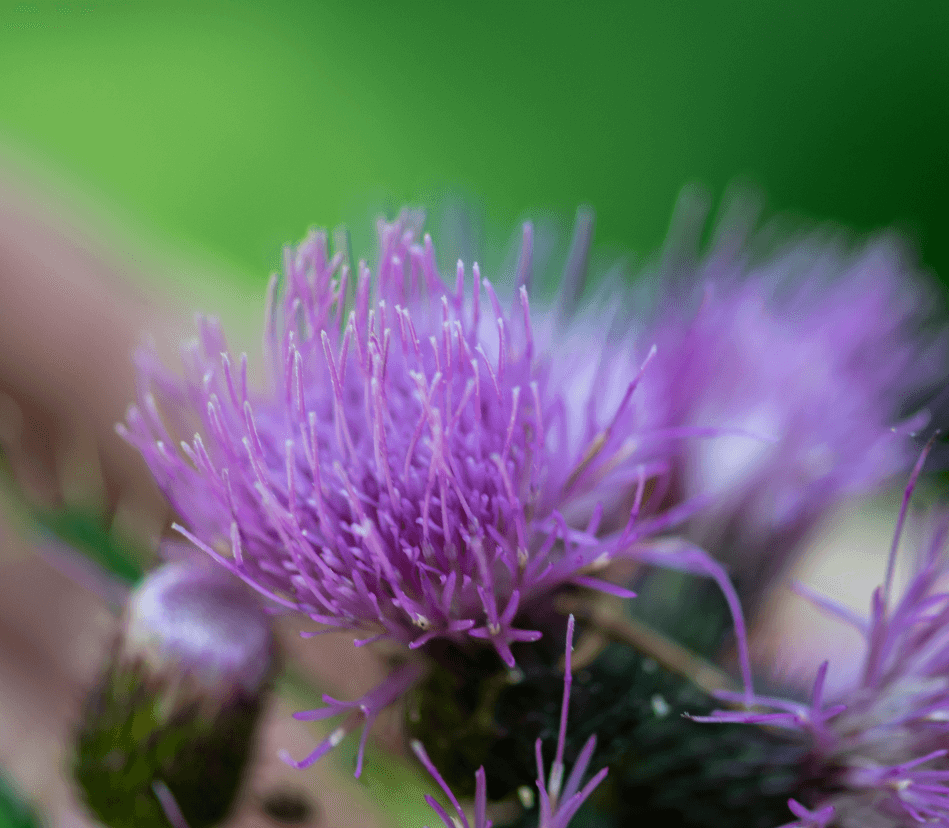